Trouble on the Horizon 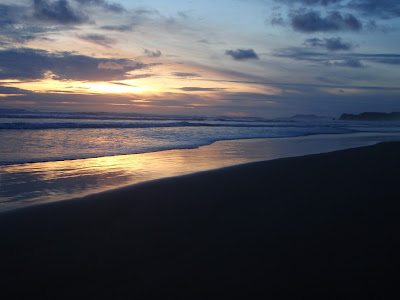 While I was on my visa run with my dad, I began getting emails from the station house saying that a dog had been breaking into the hatchery destroying the hatching nests. My first thought was we need to keep the hatchery safe and figure out what dog was responsible, but it wasn't until last night did I truly witness the wrath of the dogs. Since I wasn't there for the first 3 attacks, I only had Kayla and Victor's account of the destruction, which was the dog was breaking the side of the hatchery and going for the nests that were currently hatching.

Around 8:30 people who had second patrol went to bed, while I went out on patrol with our 3 newest volunteers, who were Costa Rican locals. They had been there for 3 nights and were leaving in the morning and had yet to see a turtle nesting. We walked for almost 2 hours without seeing anything, but just as we were walking up to the hatchery, we saw a sea turtle just coming to shore. The volunteers collected all 98 eggs, while I measured and tagged her. 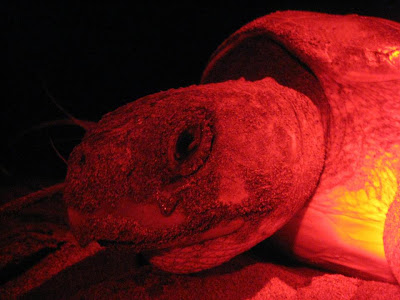 I was feeling quite satisfied as we carried the eggs up to the hatchery. However, when we got to there that feeling rapidly disappeared. We had another break in! The dog did not just take one nest, but dug out three nests! Filled with the feeling of defeat,I placed the new nest into the hatchery and the volunteers dug around in the attacked nest looking for survivors. We were excited to see that we were able to save close to 50 babies from two nests and the other was barely touched.

Luckily when we woke up this morning the dogs hadn't returned, but with the daylight we were able to find dog tracks. Kayla and I went out and decided to participate in CSI: Dog Edition. We measured the paw print and then took each suspect, aka our local dogs, onto the beach and watched them gait and measured their paw size. In a bitter sweet conclusion, we found that the 3 sisters, mama and all 6 of the childrens' dogs were innocent due to paw size. But this meant that the culprit was still at large and was also HUGE!!!!


We then decided to create a redneck alarm system by tying tin cans and bottles to the hatchery wall in hopes that maybe we would hear the dog breaking in. So if all goes well, we will be catching our culprit before anymore damage is done.